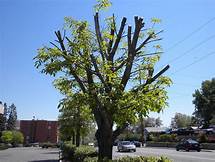 Written by JOE LAMP’L and published on https://www.growingagreenerworld.com/

Many people think that you can shorten a tree by cutting off the top. What they don’t realize is that topping permanently disfigures and damages the tree, and may even kill it. Once a tree is topped, it can be improved with the help of an arborist, but it can never be completely restored. Read on for tree topping information that can help you make better decisions about shortening trees.

Tree Topping – What You Don’t Know is Killing Your Trees

Even though certain death is imminent trees are still topped indescriminetly

They’re everywhere; trees disfigured and dieing from years of abuse. Specifically, I’m referring to the misguided practice of tree topping. Also known as pollarding, stubbing, dehorning, heading and several other terms, it has risen to crisis proportions nationally over the last decade.

Topping is considered the most harmful tree pruning practice known. In fact, it’s regarded as such a serious crime against nature, one organization’s major efforts over the past two decades has been to stop this “torture and mutilation”.

That group, Plant Amnesty was founded in 1987 by Cass Turnbull of Seattle, WA. This nonprofit uses a unique blend of humor and controversy to raise public awareness of these “Crimes Against Nature” committed in our own backyards. Yet despite more than 20 years of spoken and written information, it remains a common practice.

According to The International Society of Arboriculture, the most common reason given for topping is to reduce the size of a tree, either because it has become too large for the property or a perception that it may pose a hazard. Ironically, topping is not a viable solution to reducing size or hazard.

When a tree is topped, up to 100% of the leaf bearing crown is removed. As leaves are the food source for any tree, the absence of this food supply can temporarily starve the tree.

As a defensive action, the starving tree responds by rapidly sending out multiple shoots from latent buds below each cut. This action is the tree’s survival mechanism to put out a new flush of leaves as soon as possible. Moreover, if the tree does not have sufficient stored energy reserves to respond in this way, it will seriously harm the tree, even leading to its premature demise.

Topping Does Not Control Size

As new shoots grow to desperately replace their food making factory, they do so rapidly, sending up numerous “water sprouts”. In some species these new shoots can grow up to 20 feet in one year. Trees will grow back rapidly and they don’t slow until they reach about their original size. It only takes up to a few years for that to happen.

Topping Does Not Make Trees Safer

The new growth that rapidly ascends from latent buds just below each cut is only anchored in the outermost layers of the parent branch. These weak attachments will never have the structural integrity of the original branch and can break off easily, even years later when they are large and heavy.

When proper pruning cuts are made (just beyond a branch collar at the branch’s point of attachment), healthy trees are genetically equipped to close the wound. Improper cuts from stubs or topping don’t heal as readily and may not be able to close. The exposed wood creates decay, entry points and pathways for pests, diseases and destructive organisms to move into and through the branches.

Recall that as a tree is topped, it rapidly grows back, although with thinner, weaker branching. Topping to reduce size is a vicious cycle. Each cut sprouts multiple new branches and the conditions become exponentially problematic with each cycle. Eventually, when the tree dies because of the effects of the cumulative stress and damage, even more money will likely be spent to remove it.

When the occasion arises and it becomes necessary to modify the height or spread of a tree, consult or hire a professional arborist. An arborist will determine the type of pruning that is necessary to maintain or improve the health, appearance and safety of your trees.

Certified or professional arborists won’t use tree-damaging climbing spikes unless they are removing the tree completely, they don’t list topping as a service in their yellow pages ad and they’ll never suggest it to you as a solution, because it’s not!