Vines And Trees: Do Vines Harm Trees By Growing On Them? 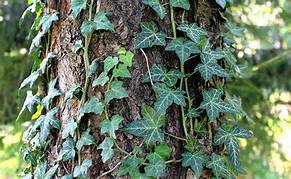 Written by Loz James and published on https://takeayard.com/

All vines will cause structural damage as they grow on trees. Vines literally glue themselves to the bark of a tree as they climb, that increased weight can potentially break branches. The vines capture more wind, snow and ice than what the tree is used to and capable of supporting, leading to a potential toppling of the tree.

Vines can look attractive when they grow up your taller trees. But should you let vines grow on trees? The answer is generally no, but it depends on the particular trees and vines involved.

Do Climbing Vines Kill Trees? (What You Should Know)

We’ve got some hundred year old turkey oaks in our garden, they’re 150 feet high and protected because they’re so old. These grand ‘ole trees have wide trunks with ivy growing up them, and I noticed recently that our neighbors have cut their ivy back.

We’re thinking of doing the same as we’re worried these vines may get to the stage where they hurt these great old trees.

If left to grow unchecked, climbing vines will slowly strangle and smother their host tree, eventually killing it. Broad-leafed vines shade out the sun slowing photosynthesis, while aerial roots trap moisture in the bark and encourage insect attacks and disease.

Let’s dive down into this subject in more detail, and discover how vines harm trees, and what we can do to both prevent and remove them so they don’t do lasting damage…

Why Are Vines Bad For Trees?

Vines climb trees for an ecological advantage. They take advantage of the tree’s strong trunk, safe branches, and great height. But what is a clear advantage for the vines is a disadvantage for almost all trees. Vines are bad for trees because they shade the tree from the sun, hold onto too much moisture and can do structural damage.

Baby vines growing up a tree are pretty. It’s not until much later – sometimes too late – that you realize your fast-growing ivy is killing your 100-year-old tree.

Vines harm trees in several ways. Most vines are very leafy. Their dense leaves can shade out the sun around the base of the tree and in the canopy. Photosynthesis slows down. When parts of a tree are too shady, the tree can discard, or shed, that part.

A vine that has colonized a tree is large and heavy, particularly when wet or snowy. The unnaturally heavy weight can pull down limbs and break branches.

Large vine systems will also compete with the tree for nutrients and water.

Vines that dig into bark with aerial roots trap moisture on the bark. The excess moisture around the bark encourages moss, mold, and insect attacks. The tree may become diseased.

Some types of vines, like wisteria and American bittersweet, climb by twining their entire stems around a support. Wisteria vines are beautiful and fragrant, but with time, their heavy stems will strangle the tree. Heavy twining vines can deform limbs.

Not all vines are bad for trees. Slow growing vines like clematis, crossvine, passionflower, and even poison ivy are controllable. But you will have to be vigilant in pruning them. Vigilant!

Will Vines Growing Up a Tree Kill it?

Arborists say all vines will cause structural damage and that letting vines grow up trees is NEVER a good idea. But will it kill it? Eventually, yes. Left to grow wild, a vine will strangle and smother a tree.

Should You Remove Vines From Trees?

Arborists say yes, try to remove the vines, and the sooner the better because some vines grow fast. If it’s an old vine, though, pull gently or not at all because you can hurt the tree.

With vines, the problem with pulling them off a tree is complicated by their entwining and climbing habit. Vines like English ivy climb with aerial roots. The roots attach right into the bark. So, yanking on the vine will probably yank off tree bark. Vines damage old masonry walls in the same way.

If the vine is still young, then removing it shouldn’t be a problem. Gently pull it away from the tree bark, then pull it up by the roots. Be sure to wear gloves, a long-sleeved shirt, long pants, and boots as some vines produce an oil that irritates skin.

Check in with your local agriculture extension office for advice about what to do with the vine once you’ve pulled it off. Sometimes vines are good for the compost bin, but if the vine is invasive, they may recommend burning or bagging it.

The part of the vine entwining the upper tree will die. After months or even a year, the dead vine will start to decompose and fall off. At that point, you can pull it off.

But unless you also remove the roots, you will just get more vine growth next season.

How Do You Kill Vines Without Killing Trees?

To kill vines without killing the tree, too, you can use an old-fashioned manual method or use an herbicide from a garden or hardware store.

If you notice vines starting to grow up a tree, pull them off gently. Try a small test area. If you see you are pulling the bark off – then stop.

Some arborists suggest that you don’t pull at all, if the vine has a good hold on the tree. Instead, use some sharp gardening clippers, loppers, or a saw to cut the vine about a foot up from the base of the tree. Then, cut the vine every 6 inches or so up the tree, as far as you can reach.

Then, be patient. You’ll see the vine slowly dying on the tree.

Once the vine is good and dead (it will take months), you can try to get it off the tree. One DIY expert tried tying a climbing rope to the end of a 40 foot long vine reaching up a tree. Then he walked away from the tree while pulling on the rope, hoping to pull down the dead vine.

If you prefer chemical methods, then experts recommend stopping vines in the bushy stage with Brush and Vine Control. For this method, first clear the leaves out of the way with a mower or weed wacker. Then, attach the container to your garden hose. Spray the area with the vines (be sure not to spray the trees).

The manufacturer recommends keeping pets and kids away for 24 hours.

For large, well-established vines, you can cut them back a foot from the ground. Then apply a systemic herbicide to the stumps.

For both manual removal and chemical means, chances are excellent that you’ll have to repeat the process a couple of times before you win the Battle of the Vines.

How Do You Stop Vines Growing Back?

Start early with prevention and be vigilant. You can be too aggressive! Clear a 2-foot area around the base of the tree of any vines by pulling them out by the roots after a rainy day. Pulling vines to kill them requires dedication and patience – but mostly patience.

Persistent pulling, season after season, will weaken the vines. Be sure to water the area well before pulling. A small shovel or a garden fork can help you uncover roots.

Then, cover the pulled area with mulch or lawn fabric so the vines have a hard time growing back. Or, add a native plant that will compete with the aggressive vine.

Sometimes, the vine’s root system is too large to pull. If the vine stem is large and woody, you may need a pruning saw to cut it off near the ground. Then, you can try smothering it with mulch or lawn fabric.

If you want a green solution for killing a well-established woody vine’s root system, try the salt and duct tape method, or use a solution of vinegar and boiling water. These solutions are not instantaneous, like Round Up is, but with some persistence, they will kill the vine.

If your vine patch has creeped over a large area, and you can’t even see where to pull, first remove the leaves. You can usually do this with a lawn mower or a weed wacker. Then, use some sharp clippers to clip up the vines into pieces.

Take a rake and gather the clipped vines. Once you can see dirt, you can pull up the vine by the roots.

If left unchecked, climbing vines can eventually suffocate and kill a tree – so it’s good to try and prevent them from doing this in the first place with some strategic and patient cutting back, so you don’t damage the tree itself.

But if you do have vines that are threatening to overcome a tree – and you don’t think you can wait for the organic method to work – then you may have to use chemicals that target the climbing vines but that won’t harm the tree.

Whatever method you use – it’s always a good idea to get rid of climbing vines on the trees in your yard, as the last thing you want is the majestic tree itself being eventually killed.