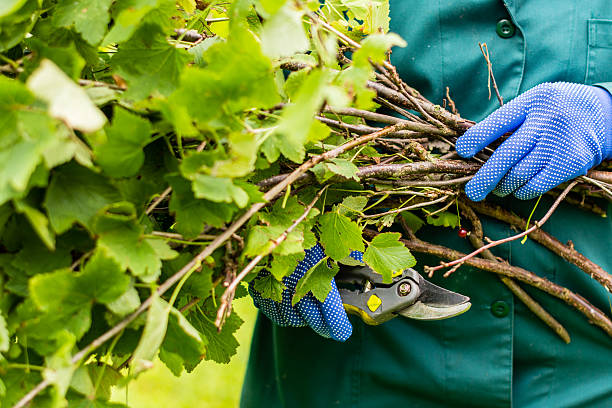 Written by Shannon McKee and published on https://davesgarden.com/

As a seasoned grower or newbie, there’s undoubtedly nothing that would bring you more joy than seeing your plants flourish under your care. Of course, that’s why you’re reading this right now. Given, there are many practices that you’ll need to learn in your journey to achieve this; and one of these such practices is hard pruning/rejuvenation pruning.

Hard pruning is a pruning technique that removes quite a lot of wood. It is also known as three-budded pruning since it involves cutting apple and pear trees back to the third bud on fruit-bearing branches and is recommended for artificially structured apple and pear trees such as cordons, espaliers and fans.

You may think that an older woody plant, like a fruit tree, may be ready to be replaced, but there is a technique that can give them new life.

Overgrown and neglected woody plants aren’t always a lost cause, so don’t rush to replace them with new plants. These trees and shrubs can be revived using a method of pruning known as hard pruning as it is a more in-depth pruning that goes deeper than regular pruning. This type of pruning is also known as renovation pruning or three-budded pruning.

Why Use Hard Pruning?

Hard pruning is useful for woody plants that have a lot of old growth but lack significant new growth. Using this technique will reduce the stress and strain from the old growth, and will induce the plant to put out healthy new growth.

One other reason that gardeners might use three-budded pruning is to even out woody plants growing in a lopsided fashion. This will make your tree more aesthetically pleasing and can be a quick fix to beautify your landscape, but it’s not just a cosmetic technique. Plants growing crookedly, especially heavy structures like trees that may favor one side as they develop, can put an unnecessary load on their trunk, strain their roots, and create structural stress that negatively impacts its health. Taking the time to do this renovation pruning can have an equally positive impact by redistributing some of that weight away from the trunk.

When to Hard Prune

The right time to hard prune will depend on the type of plant you need to prune. Typically, deciduous plants need to be pruned when they are dormant during the fall or winter months. Evergreen plants that need renovation pruning should receive it in the spring, as this is when they are just starting the growing process again. Keep in mind that any plants that are pruned in a season that’s different from the usual should be hard pruned during their regular pruning window.

Can Your Wood Plant Survive?

Keep in mind that this is a specialized pruning technique that’s only necessary in specific instances so it’s important to have a clear idea of a plant’s growth rate and history before committing to this task to figure out whether or not the tree or woody plant had suitable growth over the past year to see if a hard pruning is necessary.

For example, there’s a clear difference between tree that’s still growing vigorously won’t require as deep a pruning as advocated by hard pruning. For trees, a good rule of thumb is if the tree grew over 20 inches, it had a vigorous year of growth. In this case, you’d want to ignore the three-budded rule and stick with allowing the spur bearer to keep between four to six buds. Trees that didn’t grow over 20 inches aren’t thriving, and the three-budded rule should be in play. The spur bearer should be cut down to three buds.

For neglected trees and other woody plants, you may find that there are more spur bearers than you can keep track of during pruning. This amount of spur bearers can make it feel more complicated to hard prune the tree, but it doesn’t have to be so. You can prune off some of the excess of the spur bearers. The easiest way to do so simplifies the tree by only allowing the spur bearers closest to the framework branches to remain.

Talk to the Professionals

When it comes to hard pruning and trees, it may be beneficial to speak to a professional if you have a large tree that needs severe hard pruning. They can advise you on the health of the tree and the viability of the tree surviving the process. They also can safely perform the necessary work if you think it may be beyond your capabilities.

You may also want to find about any ordinances that may impact you working with the tree, such as if the tree is on the property line between you and a neighbor.

Hard pruning trees and other woody plants may seem like going overboard, but it can be a beneficial way to get a tree that’s no longer flourishing to start exhibiting more steady growth in the future. Be sure that any tree that you’re planning on hard pruning can survive the process before getting started or your hard work may be for nothing. The reward that comes from utilizing this pruning methodology are trees that are growing more rapidly and steadily with new fresh growth.