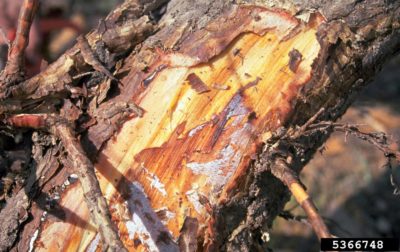 Written by Steve Nix and published on https://www.thoughtco.com/

A butt rot or root rot pathogen can invade a susceptible tree through wounds. Unlike heartwood rot, however, root rot and butt rot can also be transmitted through naturally grafted roots from infected trees or even dead trees. If invasion and subsequent rotting occur in the wood at the base of the tree, it is called “butt rot.” If it occurs in the roots, it is called “root rot.” Both rots may be caused by the same fungus, and a number of different species can attack tree roots and butts.

Root and butt rot is one of the most common forms of tree disease affecting hardwoods. Many fungi are capable of causing root rots and some cause considerable decay of the butts of trees as well. Root rots are more common on older trees or trees which have sustained root or basal injury. Root rots thrive on poor soil conditions. Trees with extensive root rot are less able to tolerate extreme weather conditions like extended droughts, long periods of heavy rain, or unusually high temperatures.

Trees with root and butt rots (the one of most concern is Armillaria root disease) typically have combinations of crown dieback, loss and/or discoloration of foliage, and a generally unhealthy appearance. Internally, diseased roots exhibit patterns of discoloration and decay. Diseased trees can live for years without symptoms but, more commonly, trees with extensive root rot decline and eventually die in several years. Conks (fruiting bodies) at or near the base of declining trees are indicators of root rot.

You can only control root diseases in trees by prevention. Prevent root diseases by avoiding root damage and wounds to the lower trunks of trees. When planting trees in areas where trees have previously died of root disease, remove old stumps and roots to reduce local fungus spread. Consider soil sterilization with an appropriate pesticide such as methyl bromide or vapam according to local conditions and state and federal regulations. Contact your county extension agent for specific information.

Effective treatments for curing established root diseases in trees are unknown. Sometimes careful crown reduction by pruning and fertilization can prolong the life of diseased trees by reducing the transpirational demand on ailing root systems and promoting overall tree vigor.